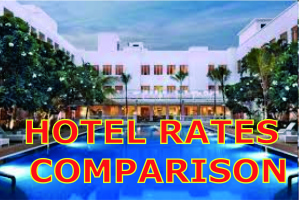 A selection of the best deals available from the UK to some of the most popular locations at the cheapest prices.

Search ALL hotels in Marbella, Spain


A general misconception when talking about Marbella is that it just applies to the town but there is also the municipality of Marbella; all

urbanisations from Cabopino to Guadalmina are in the municipality of Marbella and are all linked by the N340 coast road. Marbella Town is situated in the middle of this area at Km186, off the N340 and is a mere 20 minutes drive from Málaga international Airport along the motorway (toll road).

The history of the town goes back to Paleolithic times, as we can see from archaeological remains found in the area.

Then the Romans came and settled, leaving clear evidence of their presence in the area, especially in the Las Bóvedas area and the Villa of Río Verde, with its exceptional mosaics.

Also in Marbella is one of the most interesting Visigoth remains in the country, the basilica of Vega del Mar, which the Moors called the “well lived in,” and there built a fortress that has survived the passage of time. The urban centre they built on is now known as Marbella’s Old Town, with aristocratic buildings like the Hospital Bazán and convents that hold a permanent place in the history books of this nation; history dictates that from one of these convents the ransom of Christian prisoners, among them Cervantes, was negotiated.

In modern times, Marbella has been a mining town and an agricultural centre before becoming what it is today. It was the capital of the iron industry in this country in the 19th century, with three plants in La Finca de La Concepción and three in the El Ángel area, belonging to the Heredia and Ejiró families. A full 75 percent of all the iron produced in Spain came from the El Peñoncillo works at that time, but it closed down in 1931. Competition from northern Spain sank the industry in the south when vegetable fuel was replaced in the production process.

Marbella was also a pioneer in agriculture in Andalucía, with the Marqués del Duero farm and, on a lesser scale, the El Ángel farm making an industry of what had previously been a subsistence activity. At the end of the 19th century, the aristocrat Manuel Gutiérrez de la Concha designed what is now San Pedro de Alcántara, the biggest farming entity built in this country, covering 10,000 hectares of land. The Marbella of today is a modern coastal town with an abundance of quality restaurants, nightclubs, casino, cafés, bars, art galleries and exclusive boutiques; ranging from very reasonable to expensive. Marbella has a ‘soul’ and a traditional pace of life.

This metropolitan town caters for just about every taste and does not have to be overly expensive if you are willing to discover the less touristy and glitzy establishments in favour of authenticity.

In the centre of Marbella, Avenida del Mar runs between La Alameda Park down to the paseo maritimo (coastal road), this is arguably the most attractive promenade on the Costa del Sol, flanked by restaurants and bars and running through the centre stand numerous sculptures by Salvador Dalí. To appreciate the real character of the town a visit to the old town will reveal the labyrinth of narrow streets, white washed houses, restaurants, shops, boutiques, old churches and squares; all enveloped by the ruins of an old Arab wall.